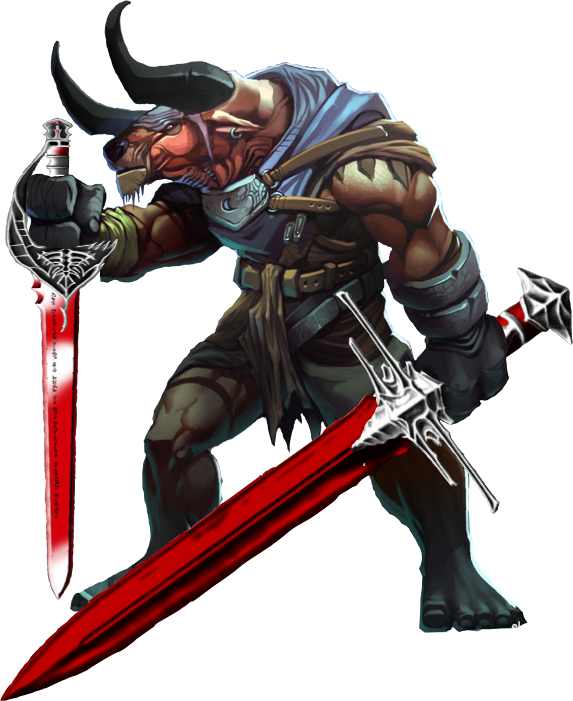 Mergerij is actually about the right age for a young adult among other Minotaurs at 56 years old. His line has been producing palladins from scrolls they saved from saved from Dwarves regarding the virtues of palladins and their powers. Mergerij was raised on tales of Dwarven Knights, Earth Warlock, Palladins, and Wizards that fought in the hey day of the Dwarven Empire. He regards the War of the Fair and the Strong


OOC Note:
1) I increased his age from what it says in the canon of the books and chose to make his righteous behavior and ingrained personality as you will see,
2) how the scrolls of the time refer to the war.

as the greatest tragedy to good people of all races. He owns over 80 bound books and 147 scrolls on these topics:

According to his father whom was one of the Minotaurs possessed when the demons raided and Xerx’ses the first exorcised them. His father and mother both died a few years after that battle their wills broken by the experience. Mergetij had finished his training then and the following day they just never woke up.

Grief caused him to turn to scripture and his lessons making him into an overly righteous Palladin type of hero who has a nasty habit of getting up on a soap box and telling others what they need to do to become better people (Mostly from his black and white view of the world). When his friend Xerx’ses the second was selected to learn magic Mergerij thought it was an amazing honor since it had been over 200 years since anyone else had shown the aptitude. Xerx’ses the second and Mergerij’s best friend growing up had been Groun’na and he had saved them from one of the demon possessed elders the year before.

OOC Note:
3) Xerx’ses was 9 years old during the demon infestation, Mergerij was 14 and Groun’na was 18 at this time.


Groun’na couldn’t understand why they couldn’t play and explore anymore (Groun’na’s whole family was possess and the elder he saved them from was his grandmother) he had done everything to save Xerx’ses the second and Mergerij and now Xerx’ses was going to live with creepy old Azad in his tower. Mergerij tried to comfort his friend and after the assembly broke up they went for a walk but Groun’na was inconsolable. Groun’na turned to quarreling and then began spewing wicked barbs verbally about Xerx’ses the second and Mergerij. Would Mergerij stood up for himself they came to blows as Groun’na only knew one way to solve problems, kill them.


“Why should I grow up things were fine the way they are?!?!” shouted Groun’na
“The world changes whether we want it to or not, now face it with some dignity and be happy for our friend,” replied Mergerij.
“NO CUB IS GOING TO TELL ME WHAT TO DO!!”


He nearly beat Mergerij to death were it not for others hearing the fight and separating them. Mergerij and Groun’na have never forgiven each other and what was a gulf over time festered into a abyssal chasm of hate from friendship lost.


Then just over a year and a month ago came the word of the Elders – Exodus.


“People, we have been shackled by the sins of our forefathers from eons past. With great power comes great responsibility, and if the tribe is to do anything with this incredible rune arsenal, it should be to make the world a better place, and atone for the past crimes committed by the Minotaur people over the years.”
- Mergerij


The council summon Mergerij first of all young ones and asked which weapon he would have. He asked for the one that would try the user the hardest by bearing its burden. So it was decided to give him the first of two matched set of blades (the twins got the other set) and he now bears Cutter and Sticker. Cutter is a Longsword and Sticker is a short swordd, both have crimson blades with silver & pearl handles but they bear the curse of dislike which is slowly making his righteous attitude all the more entrenched and pronounced.

Picture of Minotaur Berserker from El-Grimlock.
Picture of swords from Nerohq.
Text expounded upon from Palladiuim Books.